May 21st., - 24th.
Performance at Festival OSIMU in Taviano - Italy
July 6th.
​ISFV®  Singing on the occasion of the World Choir Games

November 8th and 9th: Françoise Vanhecke shines in the role of Martha Heiger in the theater show "Tristesses". This show, a real thriller, deals with the relationship between power and sadness. A production that can match the best Nordic series such as "Borgen" and "The Killing"!

October:
​
October 7 and 8, 2016: Françoise Vanhecke plays a major role in the show "Tristesses" in Velizy Villacoublay (France).
On October 7 and 8 you can admire Françoise Vanhecke in the role of Ida Heiger in the theater show "Tristesses". The performances take place in "L'Onde Théâtre" in Velizy Villacoublay, France (near Versailles). "Tristesses" is a musical theater that expplores the relationship between power and sadness.
tickets can be purchased on the following website: www.billetreduc.com.
More information about the show can be found under the following link: www.theatre-contemporain.net.

From October 26th to October 29th,  Françoise Vanhecke performs in the show "Tristesses", composed by Anne-Cécile Vandalem. "Tristesses" is a musical theater that deals with the relationship between power and sadness. Françoise Vanhecke plays the role of Martha Heiger, leader of an extreme-right political party. This performance is a fascinating thriller that evokes the atmosphere of the great Scandinavian series such as "The Killing" and "Borgen". Purchase your tickets at the "Théâtre de Namur" website.

To celebrate the tenth anniversary of the radio program "The cloudknitters", Françoise Vanhecke  performs with Tareq Alsayed Yahay. Françoise can been seen for the first time on Friday, September 30th at the Oude Beurs, Hofstraat 15, Antwerp. On October 23rd she gives a second performance as "Irma Bilbao".
More information about the radio program "Cloudknitters" can be found under the following link: "www.thecloudknitters.be".

For more information about this performance: go to: World Theatre Festival. 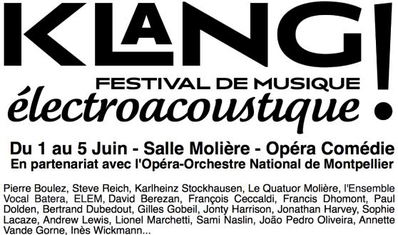 May:
Artistic performance at the International Congress on Ultrasonics, Metz, France, May 10th to May 14.

Soprano Françoise Vanhecke is a contemporary, daring, power performing and creative artist. She works closely with composers from around the world. She developed a new extended technique, ISFV® Inhaling Singing, which is part of her doctoral research at the University College, School of Arts; IPEM - Dept. of musicology, Ghent University. She appears on the show bills of the world’s leading music festivals and theatres and received different international awards. Françoise Vanhecke will perform music by Händel, Mozart, Puccini, Satie and Irma Bilbao and will play the ocean-drum and the Theremin.

January:
On January 29th 2015, Françoise featured in a radio show by Rudi Claessens on Radio Centraal
Françoise was central guest in the show "Thuisreis" and a number of performances and recordings from Françoise's albums (LP and CD) were aired and Françoise was interviewed about ISFV(r).
2014
December:
Recital "La Magie de la Voix" (L’église de Lesquin, 79 rue Pasteur, 59810 Lesquin)

February:
performance lecture by Françoise about her PhD research on the occasion of the Research Seminar MaNaMa for the School of Arts / conservatorium Ghent.

December:
- December 1st: "Little Things” Katrijn Friant and Françoise Vanhecke – 'Little things’ voice & piano .
First performance of „Little but…” by Irma Bilbao.  The first written music score with the new notations for ISFV by Françoise Vanhecke.
- December 18th: Françoise Vanhecke performs a composition of Olmo Cornelis.
In his research project Exploring the symbiosis of Western and non-Western Music, Olmo Cornelis provides new insights on the description of Central African music. This music was explored through computational techniques that approached the sound as a signal. On the occasion of the completion of this doctoral research, Hermes Ensemble, Ensemble Nadar, Maja Jantar and Françoise Vanhecke performed a composition of Olmo Cornelis that was written during this project. Exploring the symbiosis of Western and non-Western music was initiated in 2008 at the Conservatory / School of Arts of the University College Ghent and was funded by the Research Fund of Ghent University.
More information: schoolofartsgent.be
September:
M&M Question Marks at Logos Foundation.
June:
-First Performance of Flexavoice by Irma Bilbao on June 6th, 2013 in Logos Foundation.
-TEDx Ghent: Françoise Vanhecke shows her inhaling singing technique (TEDx Ghent 2013).
April:
-Prelude concert M&M Robot orchestra / Eggs to Glasgow at Logos Foundation in Ghent.
-Royal Concert Hall in Glasgow for the Unesco Music Days.
March:
-Dies Natalis for 50 years of IPEM - Institute for Psychoacoustics and Electronic Music at the Ghent University: Zeven Haikoes for voice and
tape (1968) by Lucien Goethals, text by Gust Gils.  Adaption for the voice by Françoise Vanhecke.
- Workshop EVTA on improvisation techniques (EVTA-be on Facebook).
January:
"Extended vocal techniques related to the 20th and 21st century repertoire for clarinet and voice", European Clarinet Festival.